The world's sleekest square of silk, sold every 25 seconds

In the fashion world there are scarves, and then there is the scarf. Queen Elizabeth II wore one for her postage-stamp portrait. Jackie Kennedy kept the Nantucket rain off her hair with hers. And when Grace Kelly broke her arm in 1956, she memorably knotted her scarf into a sling. With some squares priced over $2000, this is one of the costliest pieces of silk one can buy—a fact that does not keep the things from floating off the shelf at a rate of two per minute. If you can’t guess what this accessory is by now, you’ll probably never own one. After all, Hermès—France’s most storied luxury brand—doesn’t advertise much, and it hardly needs to advertise its scarves at all. 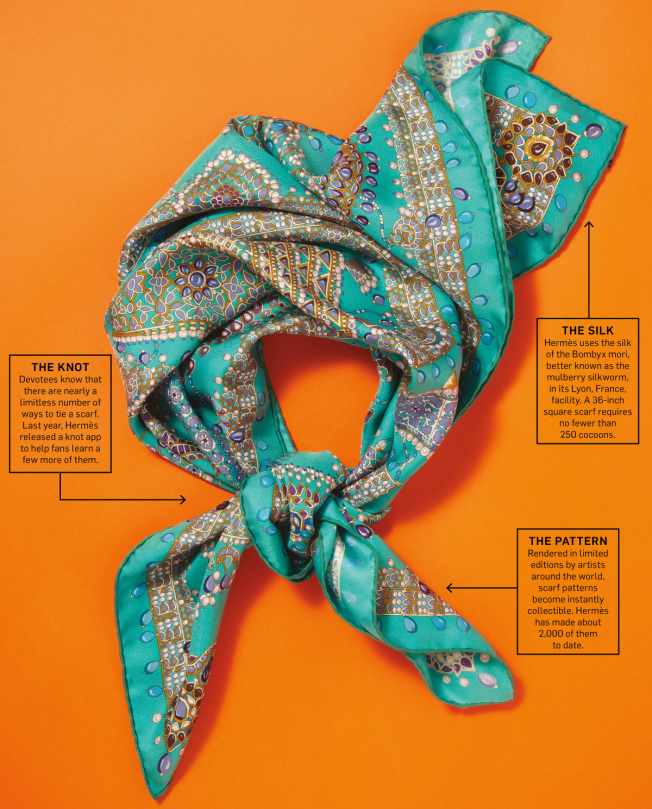 "The key point to understanding the cachet of Hermès scarves has a lot to do with how women perceive their images," explained fashion historian, author and Hermès devotee Polly Guerin. "A woman of privilege wants to be set apart from the crowd and say, 'I’m special,' and 'I can afford this.'"

Of course, such logic works with most any luxury brand. What makes the Hermès scarf unique is the carefully orchestrated rarity of the product.

Hermès works with a small coterie of artists to create about 20 new designs a year. A single pattern may take 18 months to reach stores, including the 750 hours required to engrave up to 43 silkscreens—one per color—all applied by hand. What’s more, unlike many brands that license their accessory lines to producers in China, Hermès is proudly, stubbornly French. Its team of seamstresses and silk printers in Lyon is told to take its time and do its best work. There are no production quotas.

The result is a fashion accessory that comes with the one thing better than a head-turning price: a genuine mystique. It helps that the house of Hermès originally made saddles and harnesses for the likes of Napoleon III. Silk produced for jockey’s riding jackets gave rise to the idea for scarves, which first appeared in 1937. The colorful prints drew stars including Audrey Hepburn and Catherine Deneuve, whose own mystique has helped lure their younger counterparts: Oprah, Mariah (Carey) and Sarah (Jessica Parker) to name just three.

In the process, Guerin said, Hermès scarves have become a kind of fashion currency: "It’s not unusual for a woman to own a collection of Hermès scarves and in the end bequeath them to other women, as the scarf has hereditary value."

It has cultural value, too. Retired New York PR man Dirk van den Heuvel, a regular at Studio 54 back in the day, remembers that society ladies weren't the only fans of Hermès scarves. "Every drag queen in the world has to own one or two," he said, "and most fashionable gay men would want to include a few in their wardrobe."