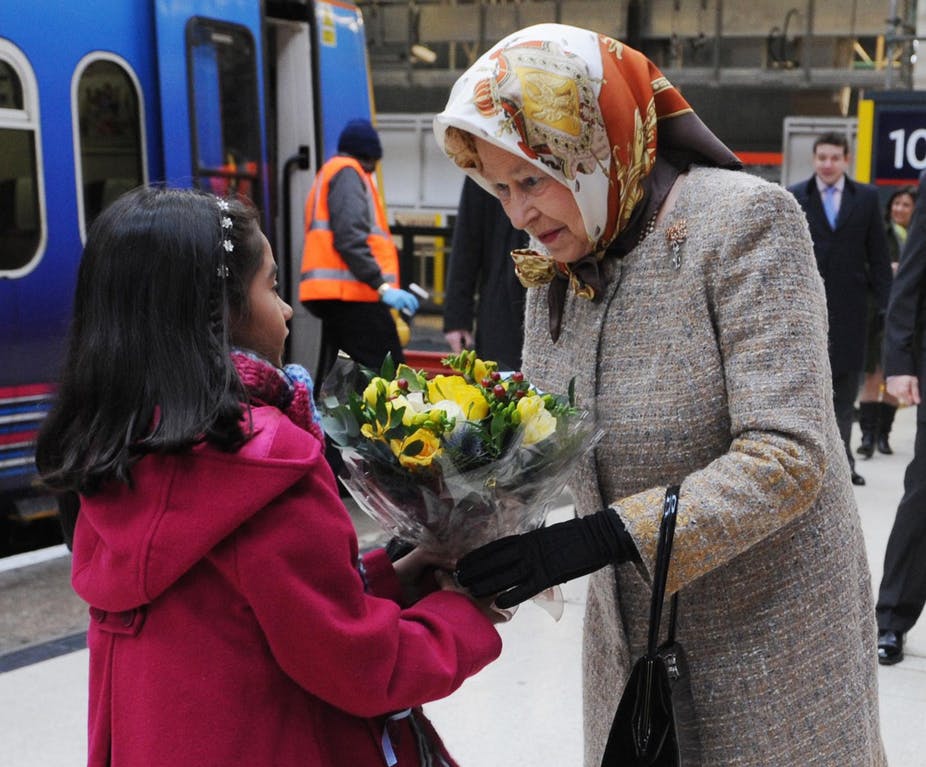 True, just as some men choose amusing neckties to enliven monochrome suits, many women who work in an atmosphere that requires conservative business apparel will wear scarves to add a fillip of color and distinction.

But the trend is anything but “new.” In looking at the history of scarves in the 19th and 20th centuries, it’s clear that the allure and power of scarves has always existed – and persists.

A single piece of cloth

Like much of high fashion, scarves can signal one’s status, and limited edition scarves – often only made available to favored customers – can act as specific indicators for those in the know.

For example, fashion houses send scarves, often during the holidays, as thank-yous to loyal clients. Those produced by Parisian couturiers during the 1950s were especially chic, often designed with sketches of the maison; others displayed printed patterns in the whimsical, painterly style of the era. 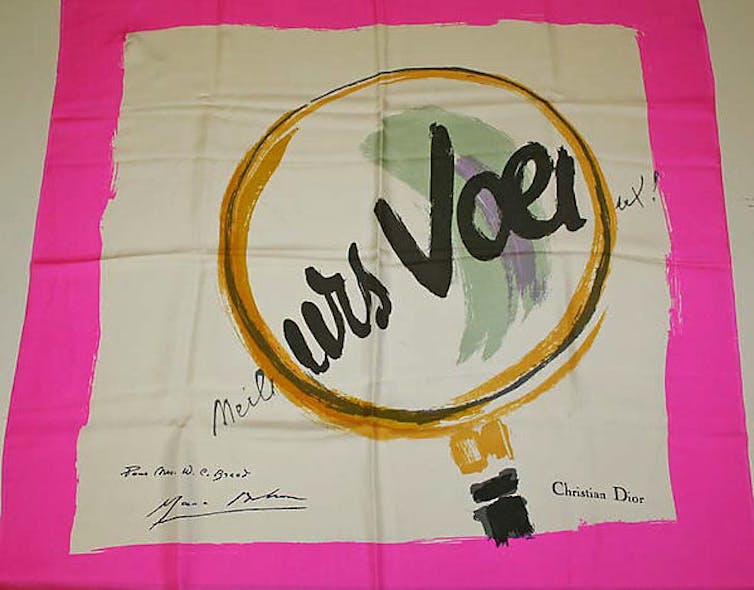 The House of Dior would present scarves to its regular customers as a token of gratitude. © 2000–2015 The Metropolitan Museum of Art. Gift of Mrs. Michael Blankfort, in memory of her mother, Mrs. William Constable Breed, 1976

And from the 1950s into the 1970s, the famed Manhattan eating and drinking establishment 21 produced a series of annual scarves and sent them to favorite “regulars.”

The restaurant’s owners commissioned well-known designers, and each year’s scarf design referred to some aspect of the restaurant – its famous façade, the collection of jockey statues outside or the number 21.

Actress Lauren Bacall, an esteemed regular, donated her 21 scarves to the Museum at New York’s Fashion Institute of Technology, where other pieces from her wardrobe were recently exhibited.

A canvas for experimentation

As a discrete space, a scarf presents an opportunity for experimentation often not available in other realms of dress that are determined – and restricted – by the shape of the body.

In London in the 1940s, Lida and Zika Ascher initiated their “Artist Squares” project, enlisting an international roster of prominent artists to design large scarves, a group that included Henri Matisse, Jean Cocteau and Henry Moore.

The Artist Squares were sold in major department stores and also exhibited – framed, like paintings – at London’s Lefevre Gallery.

To celebrate her new couture salon in 1935, the designer Elsa Schiaparelli made a collage of her press clippings and had it printed as fabric for scarves and other accessories, turning black and white type into a striking motif.

A scarf by the American designer Vera offers another variation on lettering as ornament, presenting the titles of international newspapers, each in its distinctive typeface, on a vivid yellow background.

But for prestige and polish, Hermès represents the pinnacle of scarf culture. Several aspects of its business have contributed to the company’s reputation. Founded in 1837 as a supplier of equestrian supplies, Hermès began offering scarves, called carrés, in 1937.

Their focus on exclusivity has encouraged an almost fetishistic loyalty among customers, many of whom could more properly be termed “collectors.” Limiting the number of designs they offer each season has maintained Hermès’ mystique. The company’s focus on craftsmanship helps justify their reputation and high prices; Hermès takes pride in the impressive number of colors in each design, the hand-printing process and the fineness of their silk, positioning their output as artisanal creations.

A man demonstrates the intricate screen printing process of a Hermès scarf.

While not at the level of Hermès, the American accessories company Echo, founded in 1923, also has a loyal following. The firm pinpointed the essence of the scarf with their memorable ad campaign “The Echo of an Interesting Woman,” introduced in the 1970s.

In contemporary fashion, scarves continue to serve the same functions as those earlier fine linen fichus and paisley shawls; they denote connoisseurship and sophistication.

It’s no surprise, then, that sociologist and image consultant Anna Akbari makes “Put on a scarf” the first entry on her current list of “5 Simple Ways To Hack Your Image,” recognizing their potential for instant uplift and an infusion of individuality.